This blog is a perpetual work-in-progress. Any feedback is appreciated so feel free to contact me using the tab above. Thanks for stopping by and I look forward to seeing you soon.
Posted on January 15, 2018January 15, 2018 by navethom

We heard rumors of the pass being closed every day along our trek – a massive, spring storm had dumped on Thorung La Pass along the Annapurna Circuit. As we neared the crux of our journey through the Nepali Himalayas, we saw hordes of trekkers swell and then taper until we were only two days from the pass and the hostels were all nearly empty.

It wasn’t supposed to be like this. I had done my research. March and April were some of the best months to trek the 140-mile loop encircling the 10th highest mountain in the world, Annapurna I. It was the perfect window between the tail end of winter and the beginning of monsoon season throughout the Himalayas. My research had told me we were to expect about one to two days of snow on our 20-day trek and that would only be during the highest elevations of the pass, between 14,000 and 18,000 feet. We didn’t know we’d be in for eight days of slogging through knee-deep tracks.

But now we found ourselves face to face with the longest day of the trek, a day we had dreamt about and doubted we’d make it to after rumors of avalanches and closed routes along our 11-day trudge from far below. The journey from lush jungles and rainforests through high desert plateaus and rocky river beds along the Annapurna Circuit crescendos with a notch in the mountain at 17,769 feet, Thorung La Pass. At 14,700 feet sits Thorung Phedi, otherwise known as “Base Camp” – a modest, well-kept teahouse owned by a worldly Nepali man with a head full of dreadlocks and thick-rimmed glasses.

With wind-burnt cheeks and rubber legs, we waddled the final stretch through a welcoming archway into the courtyard of a teahouse blanketed with snow. Water dripped from icicles along the awnings. I threw my poles into the snow and crashed onto my back atop an empty picnic table. My friend, Claire, came puffing in about 30 minutes later and joined me on my perch in the sun. 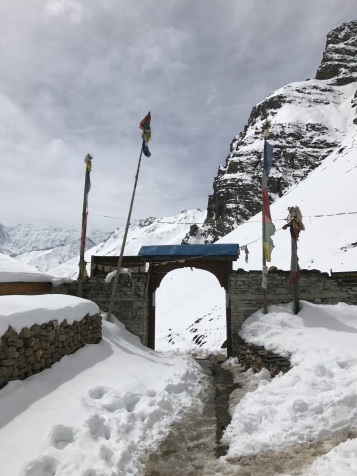 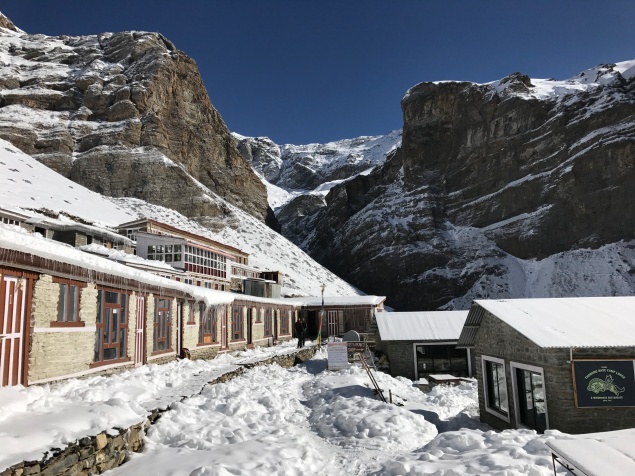 After soaking in the rays and catching our breath, we made our way through a creaky wooden door plastered with stickers from around the world. A burst of warmth flushed my cheeks as I walked into a sun-drenched community room lined with full-length windows. Long wooden tables with benches draped in yak blankets and bohemian pillows made up the perimeter while a charcoal-blackened stove acted as a centerpiece. Paper lamps hung from the ceiling and mellow reggae filled the air. If a room could hug you that is exactly what this one did.

I asked a group of guys playing chess in the corner if anyone had made the pass. A gregarious British fella with purple hair answered that a group was trying today and he hadn’t seen them return. That must be a good sign, I thought to myself. He went on telling us that the day was supposed to be cloudy and awful, but it had ended up being sunny all afternoon. It was hard to know anything for certain up there with no Wi-Fi or phone service.

We had gotten used to hearing ambiguity from other trekkers the entire length of our trip thus far. Is the weather supposed to be decent tomorrow? Have there been any avalanches on the pass today? They can’t get supplies to that town, you know. I heard the trail police are turning around all non-locals.

I was weary of these constant doubts and murmurings, a sentiment that had gotten Claire and I this far after about 90% of trekkers ahead of us had already turned around. I had quit my job and flown halfway around the world with my main goal being to complete this trek; I wasn’t about to let rumors and hearsay stop me from seeing for myself how far we could push it.

The afternoon was spent chatting with fellow travelers and sharing Snickers bars around the wood stove. As the evening wore on, Claire noted a slight headache. We settled on using the following day for acclimatization in the hopes that the ache would subside and we’d be ready to hike the 3,000 feet up and 5,000 down the day after.

After a restless night of low-oxygen, bone-chilling sleep, Claire and I spent the next day doing an acclimatization hike up to and back from High Camp, the last possible stay along the uphill of the trek. When we returned to the glowing sunroom of Base Camp in the early afternoon, a new batch of hearty trekkers were scattered around the benches. With her headache completely gone and the familiar jelly-legs underneath us, Claire and I were feeling better than ever. We were rejuvenated, revived, and ready to tackle the most difficult, dangerous, and fabled segment of the trip.

The 4 AM alarm rang and we switched from our sleeping socks into the half-frozen, crusty pair designated to the day. I reluctantly wolfed down a fried egg, toast, and tea, the only fuel I’d have for the hike besides two Snickers bars I’d tucked into my chest pockets to keep from freezing. We slapped on our crampons and shouldered the weight we would have to carry uphill for the last time. 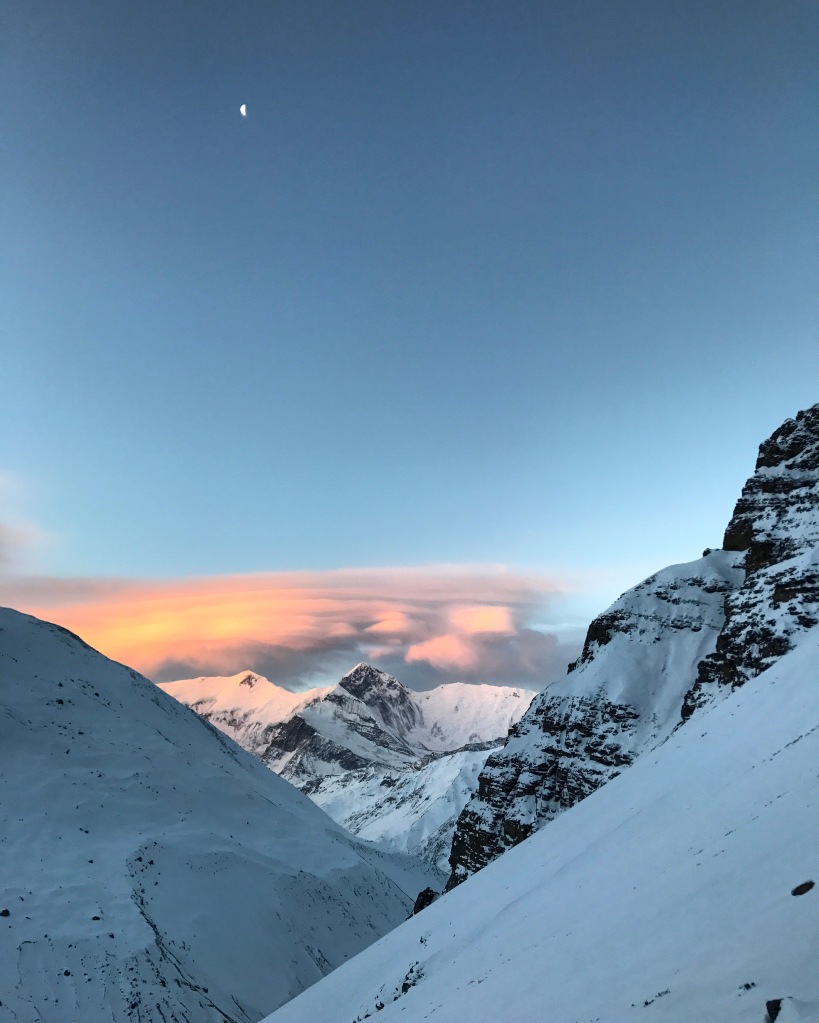 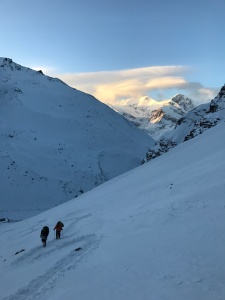 A bright, waning moon lit our tracks and headlamps bobbed on the switchbacks above. Just as the sun started to light a few clouds to our backs, I tilted my head upward and my stomach sank. A group of 30 or so trekkers were on their way down the trail coming toward me. This was a sight I was used to, but on the final day over the pass, it surely meant the worst. Wooden faces sauntered by; silent inaudible murmurs attempted to answer as I asked the hikers what had happened above. What had turned them around?

A Nepali guide trailed the group and stopped to warn me of what was ahead. He told me they were hit by a small snow slide that swept ten people in his party 30 feet down the mountain. The floor of my gut felt like lead and I looked at him in disbelief. He walked past me and turned around hollering, “Come with us! You will not make the pass. We all must go back to the start.”

I couldn’t move. Claire stood on a ledge further up the mountain. What the hell would we do now?

I looked into the sun beginning to creep over the mountains, tears welling in my eyes. We had made it up to here, from Colorado to Nepal, from stable jobs to an unknown trail halfway around the world. We had left our lives in the States to pursue a literal dream, just to be turned around only a few miles from the apex of our journey. I was broken. Sunk.

“Well we’ve made it this far and haven’t let people’s words stop us yet. Why don’t we at least get up to High Camp and we can ask people up there if it’s crossable,” Claire encouraged, always the optimist.

When we rounded the final hump at High Camp, a small group of 10 or so trekkers frantically circled together, buzzing about the possibility of making the pass. Nearly an hour passed and the sun began to beat harder on my swollen eyes.

If a guide turned their group around it had to be for good reason, right? Or was it just too much for a group of 30 to pass? What if we spread ourselves out? My mind began to race.

I turned to Claire, “Fuck it, let’s go.” Our eyes glinting and wild, we threw our gloves back on and began again up the mountain. If we met a washed out pass then we’d turn around, sure, but we weren’t about to let rumors guide us. We hadn’t up to this point, so why begin now? This was our story, and we’d be damned if we let others write the ending. 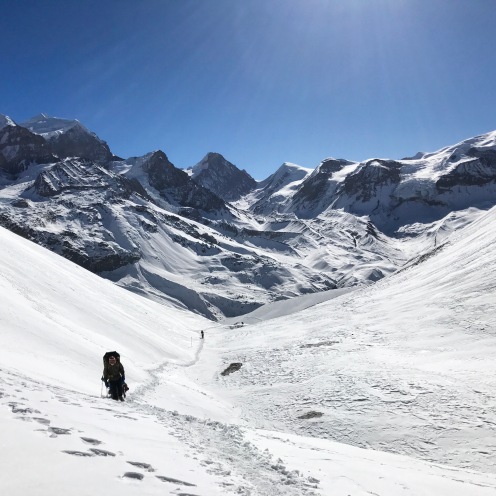 The wind ripped at our backs and our small, staggered group of trekkers snaked its way meticulously over sloppy slopes and sketchy avalanche terrain. I felt we had made the wrong decision, that we had put ourselves at too much risk and were in way over our heads, until I saw a tiny kaleidoscope of color tucked into a small slot below two massive peaks. Prayer flags.

My muscles were shot and my mind hovered a foot above my head. I felt like I was in a dream as I crashed onto my knees at the mess of prayer flags indicating Thorung La. I had reached the crux.

I hastily threw my pack on the ground and fished out a small strand of flags that I acquired in Kathmandu for just this moment. I had just finished tying them into the web of other flags as Claire jogged up to the pass and fell with a smile into the snow.

“We made it, dude!” she exclaimed. I broke out the last Snickers from my chest pocket and split it in two.

The 5,000-foot descent from snow-covered Thorung La into the wind-swept, barren desert of the Muktinath Valley proved arduous and exhausting. After a nearly 12-hour day, we made our way into a Rasta-themed hostel and cracked open celebratory beers. From the humid, dripping jungles two weeks before, to the highest point I had ever set foot, we had made it through one of the most physically and mentally difficult days of my life.

While my body was wrecked, my spirit was elated. I had never felt so accomplished, so triumphant, so whole in my life.

This trip, and particularly this day, taught me things I had never learned in a classroom or at a job: How to push myself to the brink of exhaustion. How to be patient with the wild and let it guide you at it’s own pace. How to look out for each other and form bonds with strangers.

But most importantly, this trip taught me how to find my own way, forge my own footpath, seek my own journey, and see for myself. If I had listened to people saying, “You will not make the pass, the towns are closed, the snow is too high, and the trail is impossible,” I wouldn’t have felt the overwhelming joy of finishing what I had set out to do. I wouldn’t have pushed my mind and body to their limits. And I surely wouldn’t have stood atop that pass and seen exactly where I had come from and the new path I was about to explore.

We meet countless passes throughout our lives – points of frustration and exhaustion where all we want to do is turn back and start moving in the easy direction once again. Plenty of people will discourage and prompt you to turn around. They’ll say, “that pass is closed, you can’t go that way” or “you won’t be successful at that, it’s too hard for you”. You’ll probably even find yourself doubting the direction you’re headed. But if you listen to those murmurs, if you are swayed by those thoughts, you will never crest that peak and get to the vantage point that shows where you’ve come and where your trail may lead.

More Photos from The Pass 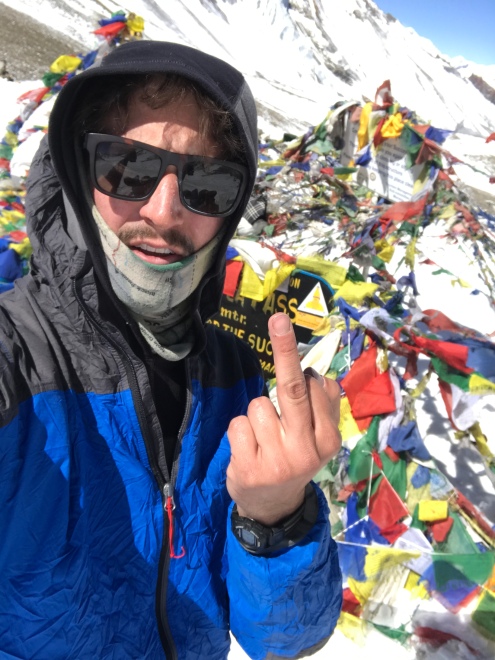 9 thoughts on “Photo Journal: The Pass”

View all posts by navethom