This blog is a perpetual work-in-progress. Any feedback is appreciated so feel free to contact me using the tab above. Thanks for stopping by and I look forward to seeing you soon.
Posted on August 15, 2016September 19, 2016 by navethom

We managed to set up our cameras for a few sunset shots and a Jetboil dinner as the clouds began to move in. Soon after the sun dipped below the horizon, rain started trickling down. Swooping up our tripods, we hustled all our belongings into the tent where the rain would begin to pour on us for the next three hours. Thunder boomed all around and lightning lit up our nylon cocoon. We hoped the bolts of lightning would skirt us as we were perched in the bowl of a sand dune with no one around for at least a two-mile radius.

“You boys would be better off waiting to camp till tomorrow night. Looks like there’s a storm coming in,” a park ranger warned us when we walked into the Great Sand Dunes National Park visitor center looking for a backcountry pass to camp the dunes.

“Yeah, we can’t really do that so we’re kind of just banking on no storm tonight. How bad is it if we do camp out there?”

“Well,” the ranger said skeptically, “it is one of the most isolated areas in the region and lightning tends to strike the dunes more than any other part of the park, so I would highly discourage it. But, if you two are dead-set, we can get you a permit.” Andrew and I gave each other the understanding and not all too uncommon for us fuck-it-glance and decided to take the permit anyway. The forecast stated 60% chance of rain and we had been planning on camping the dunes in early October for the last month.

Around midnight, the thunder began to subside and the lightning lit up our tent a bit less. Within 20 minutes, the rain completely stopped and we unzipped the tent walls to observe an eye of stars framed by a grey mass of clouds. Seizing the opportunity, we clambered out of the tent, dug up patches of warm, dry sand, and plopped ourselves down on our backs to watch the clouds roll by in front of a still, star-filled sky. With virtually no light pollution from surrounding cities, the Milky Way took center stage – a ribbon of light cascading across the black velvet canopy above. We gazed upward, drank whiskey, and soaked in the silence until the curtain of clouds began to close and our cosmic performance came to an end.

In the morning we awoke to a sunny, cloudless sky and the realization that we had consumed nearly every ounce of water that we brought into the dunes. With a two-hour hike back out ahead of us, we decided to high tail it to the car where our breakfast bounty and backup water supply awaited. After a grueling trek of two steps forward, one step back up and down the dunes, we finally reached the car and dropped our sixty pound packs and sand-filled boots.  We had ignored the wise warning of the park rangers*, opted for our own adventure, and lived to tell the tale. 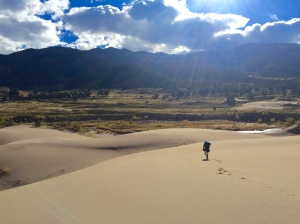 Sitting in the bowl of a dune knowing no one else was dumb enough to venture into the 19,000 acres of sand makes you feel so special and insignificant all at once. It felt as if we were the only people at the viewing party for an exclusive film – one showcasing the night sky and a cast of stars brighter than we had ever seen before. Simultaneously I felt small, as if I were just one of the many grains of sand holding up those dunes.

That’s the power of the night sky and that’s the power of the parks. Where else can you backpack into a crater of sand void of humans for miles around and watch the sky dance above, hear nothing but wind, rain, and your breath, and feel the cool, damp night precipitate on your skin? This park provided that experience, and I’m glad we were dumb enough to give it the chance.

*: I do NOT condone ignoring parks rangers and their sage advice. Camping during a thunderstorm in the middle of a sand dune was STUPID, and the rangers tried to tell us so. We were lucky to come out on the other side free of charred skin and cardiac events.

View all posts by navethom